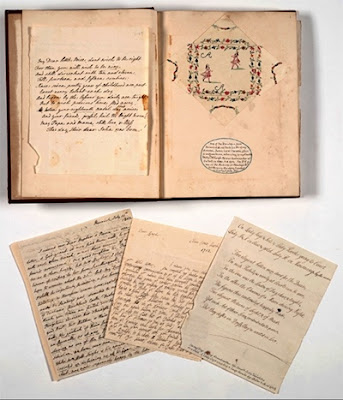 These materials provide an unpublished window into her mother’s side of the family. It does not include Jane Austen material; most of her letters were burned by her sister after her death. The collection supplements other Leigh family material already in The Huntington’s possession. 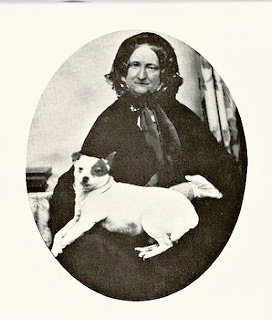 Martha Lloyd (1765 – 24 January 1843) was Jane Austen's dearest friend after Austen's sister Cassandra, and is now known also as a collector of recipes.

janeausten/ Alton in her days

Who Was The Real Jane Austen? | Behind Closed Doors | Timeline

The gardens are open to the public, with access to a tearoom. The restoration programme for the gardens was extensive, and focused in particular on the restoration of the walled garden.

Edward Knight had the idea to build a new walled garden during Jane Austen's lifetime. In 1813, she wrote to her brother Frank, "He [Knight] talks of making a new Garden; the present is a bad one & ill situated, near Mr Papillon's; — he means to have the new, at the top of the Lawn behind his own house."

Knight's original walls are mostly still intact, but the glasshouses and potting sheds, had to be rebuilt. The gardens have been restored using Edward Austen Knight's original planting scheme.

The central space is used for the production of vegetables, soft fruits, herbs and flowers. Chawton House is registered with the Soil Association, and is now certified as an organic producer.[citation needed] Everything grown in the walled garden is for use by the Library, with any surplus being sold locally in aid of the charity.

The park and gardens of Chawton House are Grade II listed on the Register of Historic Parks and Gardens. 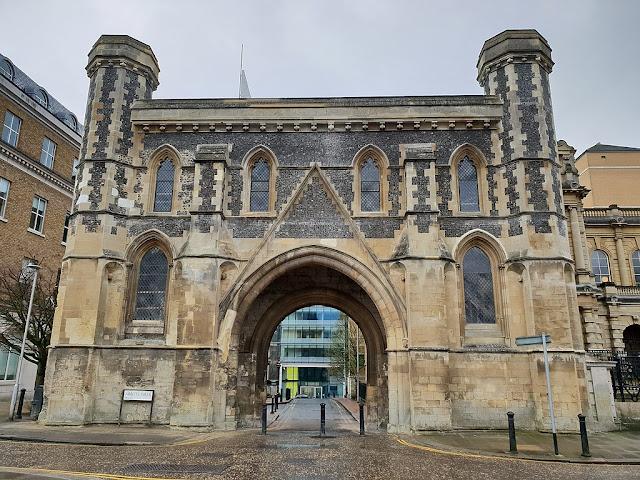 Reading Abbey Girls' School, also known as Reading Ladies’ Boarding School was a girls' boarding school in Reading, Berkshire open from at least 1755 until 1794. Many of its pupils went on to make a mark on English culture and society, particularly as writers. Most famous is Jane Austen, who used the school as a model of "a real, honest, old-fashioned Boarding-school".[1]

The Abbey Gateway was originally the inner gateway of Reading Abbey, which today is a large, mostly ruined abbey in the centre of the town of Reading, in the English county of Berkshire.

Eventually the palace was demolished and new houses were built alongside the gateway. In the late 18th century one of them was home to the Reading Ladies’ Boarding School, attended amongst others by the novelist Jane Austen. The school used the room above the gateway as a classroom.[1][4][5][6]

The room above the gateway is now used by Reading Museum as part of its learning programme for local schools, whilst the arch below is available for use by pedestrian and cycle traffic. wikipedia/Abbey_Gateway,_Reading 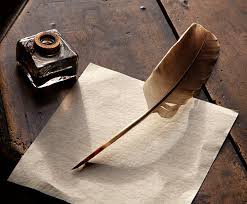 There have been only two authentic surviving portraits of Jane Austen, both by her sister Cassandra, one of which is a back view! (A poor-quality greycale JPEG and a poor-quality color JPEG of this are available.) The other is a rather disappointing pen and wash drawing made about 1810 (a somewhat manipulated JPEG of this original sketch is available). The main picture of Jane Austen referenced at this site (JPEG) is a much more æsthetically pleasing adaptation of the same portrait, but should be viewed with caution, since it is not the original (for a more sentimentalized Victorian version of this portrait, see this image, and for an even sillier version of the portrait, in which poor Jane has a rather pained expression and is decked out in cloth-of-gold or something, see this image -- for some strange reason, it is this last picture which has been frequently used to illustrate popular media articles on Jane Austen). Here's the silliest version of this portrait ever.
For a fun modern re-creation of the Jane Austen portrait, see the "Photograph" of Jane Austen lounging at a Hollywood poolside (as seen in Entertainment Weekly). See also a deliberately contemporized (but not silly) version of the portrait by Amy Bellinger. The silhouette included at the top of these files (if you have a graphic browser) is not actually known with certainty to be Jane Austen's. Here is another silhouette said to be of Jane Austen, taken from The Illustrated Letters of Jane Austen edited by Penelope Hughes-Hallett (formerly published as My Dear Cassandra: The Letters Of Jane Austen).
Silhouettes of Jane Austen's father and mother (that of her father apparently taken at a rather earlier age), a silhouette of Cassandra, and Cassandra's portrait of their niece Fanny Knight (JPEG) are also available.
In 1994, another portrait, claimed to be of Jane Austen, has been discovered among Mr. Clarke's papers, and published in a limited edition (this portrait was reportedly printed in the Daily Telegraph book section of Saturday, March 4 1995). Go to this site for more information (and a scanned image) of the portrait.
A picture of the Austen family coat of arms is also available (both the original greyscale and a rudimentary colorization). The heraldic "blazon" (description) is "Or, a chevron gules between three lions' gambs erect, erased sable armed of the second. Crest: on a mural crown or, a stag sejant argent, attired or." (Note that the ornamental winged child's head at the bottom of the heraldic shield is not actually part of the coat of arms.) The Latin motto, "QUI INVIDIT MINOR EST", can be translated as "Who(ever) envies (me) is lesser/smaller (than I)".

I declare after all there is no enjoyment like reading! How much sooner one tires of anything than of a book! When I have a house of my own, I shall be miserable if I have not an excellent library.

It is a truth universally acknowledged, that a single man in possession of a good fortune, must be in want of a wife.

Oh! Do not attack me with your watch. A watch is always too fast or too slow. I cannot be dictated to by a watch

I lay it down as a general rule, Harriet, that if a woman doubts as to whether she should accept a man or not, she certainly ought to refuse him. If she can hesitate as to "Yes," she ought to say "No" directly.

Where so many hours have been spent in convincing myself that I am right, is there not some reason to fear I may be wrong?
Jane Austen


“There is a stubbornness about me that never can bear to be frightened at the will of others. My courage always rises at every attempt to intimidate me.” ― Jane Austen, Pride and Prejudice

Original recipe from Jane Austen's sister-in-law Martha Lloyd:
"Take three Naple biscuits. Cut them in slices. Dip them in sack. Lay them on the bottom of your dish. Then make a custard of a pint of cream and five eggs and put over them. Them make a whipt syllabub as light as possible to cover the whole. The higher it is piled, the handsomer it looks."

Cheesecakes
"Our journey yesterday went off exceedingly well; nothing occurred to alarm or delay us... At Devizes we had comfortable rooms and a good dinner, to which we sat down about five; amongst other things we had asparagus and a lobster, which made me wish for you, and some cheesecakes, on which the children made so delightful a supper as to endear the town of Devizes to them for a long time."
—Jane Austen writing to her sister Cassandra, Queen's Square, Friday (May 17) 1799 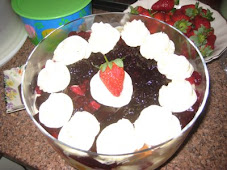 Edward Austen Leigh wrote down this description of Jane's appearence in the years just after the family left Southampton.

"She was tall and slender; her face was rounded with a clear brunette complexion and bright hazel eyes.

Her curly brown hair escaped all round her forehead, but from the time of her coming to live at Chawton she always wore a cap, except when her nieces had her in London and forbade it."

Henry Austen said of his sister, " Her stature rather exceeded the middle height; her carriage anad deportment were quiet but graceful; her complexion of the finest texture, it might with truth be said that her eloquent blood spoke through her modest cheek." Henry applied these lines to Jane: " Her pure and eloquent blood spake in her cheeks and so distinctly wrought that you had almost said her body thought."


Austen's niece Caroline recollected: "As to my aunt's personal appearance, hers was the first face I can remember thinking pretty. Her face was rather round than long, she had a bright, but not a pink colour—a clear brown complexion, and very good hazel eyes. Her hair, a darkish brown, curled naturally, it was in short curls around her face. She always wore a cap

Drawing of Jane by Cassandra 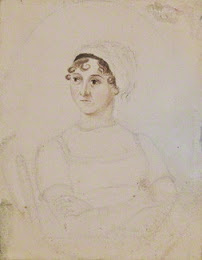 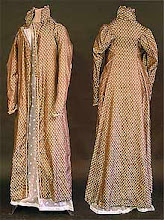 Are you a Janeite?

Photo's of the Manor Chawton House 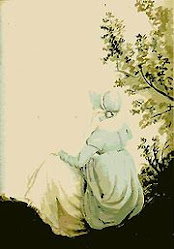 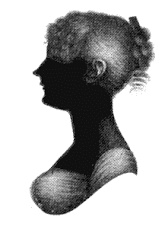 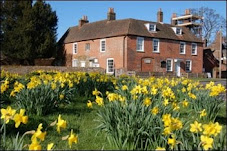 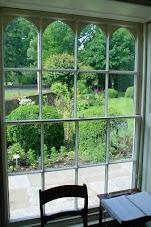 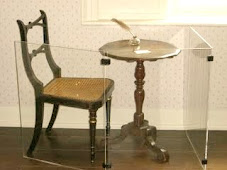 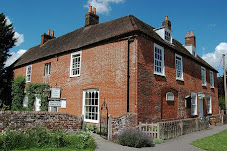 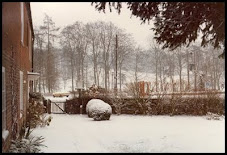 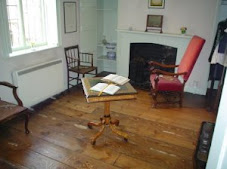 4 Sydney Place, Bath…where she lived too. 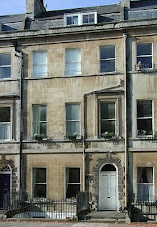 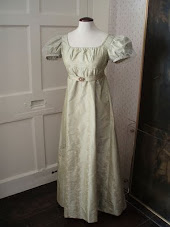